Alzheimer's in the News

When people learn that I am involved with Alzheimer’s research, one of the first things they usually ask is what should or shouldn’t they be doing to protect themselves. They only heard the other day on the news that eating cayenne infused chocolate every other Friday after 8pm will definitely prevent them from developing Alzheimer’s! “Is that really true?” they ask me.

I completely understand how overwhelming the stories can be that we read and hear in the media. Only this morning I heard a news headline on the radio that claimed if you sleep in it’s not good for your health. When the actual story came on later in the bulletin, they reported that researchers had found that sleeping more than nine hours a day increased your rate of dying by 44%. My first thought was, there goes the weekend lie in on Saturday as I’ve now only got a 56% chance of waking up on Sunday morning!

Taken literally, this would be a normal assumption, but as a scientist I then thought, oh no, here we go again! I wasn’t being given the full facts on what was probably a perfectly legitimate study. For example, what was the sample size of sleepers-in versus early risers in the study? Would you need to sleep more than nine hours a day, seven days a week to have the same effect as that for someone who slept nine hours every Friday night, so they got their well-deserved sleep-in on Saturday morning?

And herein lies the problem …

The media regularly only has space to give us some of the facts and these are sometimes out of context. I’ve had personal experience of that one! I often hear other researchers claim they don’t even recognise their own research when it is reported in the media. Headlines are usually full of spin and over sensationalised, obviously to peak our curiosity and make us listen or want to read more. Did you know that it’s not the journalists themselves, but the editors who write these headlines? Of course these are old tactics to earn a greater audience or readership, that have changed little over time. We all want to know that coffee, red wine and chocolate are good for us, right? 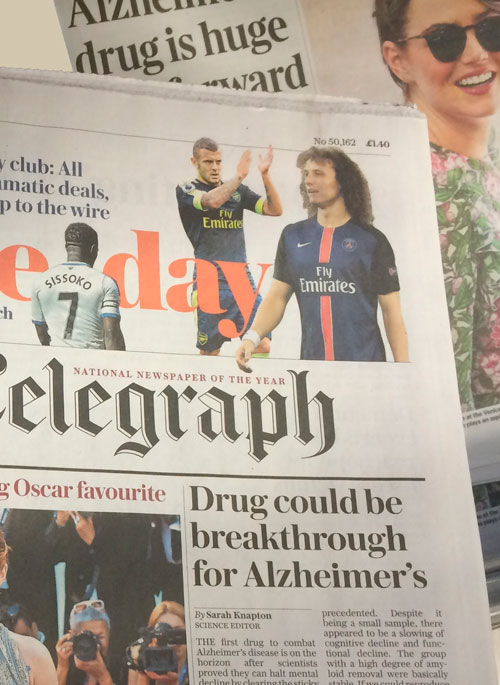 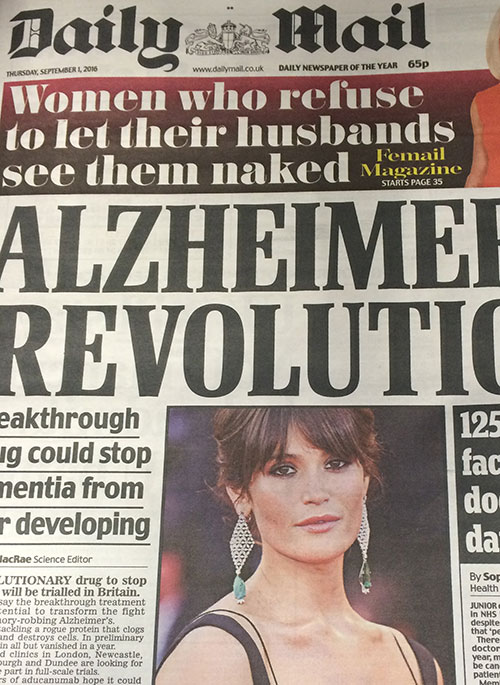 I was in London on the 1st of September, 2016 when news broke of a study that had just been published in Science, one of the world’s leading academic journals. Of course I was lured into a newsagents by a billboard screaming the headline, ‘Alzheimer’s drug is huge leap forwards for sufferers’. I quickly scanned the other UK papers and it was only The Guardian that seemed to show some restraint. They used words such as “seem to show” and “while the trial was to assess the drug’s safety and not whether patients fared better on it”. The other papers made it sound like a cure was all but done and dusted. When this isn’t in fact the reality, it falsely gives hope to families and those living with the disease. I know, I have been there myself with Mum and it is very discouraging and disappointing. Within social media, the lines between fact and spin become even more blurry as anyone with access to a keyboard can prey on vulnerable groups of readers desperate to find answers. The story of ‘wellness’ blogger, Belle Gibson and her cancer con is a classic example that comes to mind.

“Scientific trails seem to show that a new Alzheimer’s drug could benefit patients in the earliest stages of the disease, raising hopes that a treatment for the devastating condition may finally be on the horizon. While the trial was to assess the drug’s safety and not whether patients fared better on it …”

Drug could be breakthrough for Alzheimer's

From: The Daily Telegraph

ALZHEIMER'S REVOLUTION: Breakthrough drug could stop dementia from ever developing

“A revolutionary drug to stop dementia will be trialled in Britain. Scientists say the breakthrough treatment has the potential to transform the fight against memory-robbing Alzheimer’s…”

From: The Daily Mail

Game-changing jab could be offered by NHS

What you need to ask yourself

When you see these sorts of headlines that declare the next ‘major break-through’ or ‘new drug discovery’ for Alzheimer’s, or any other illness for that matter, it is important to do some of your own research to make sure you don’t get false hope. Here are some tips that may be useful: